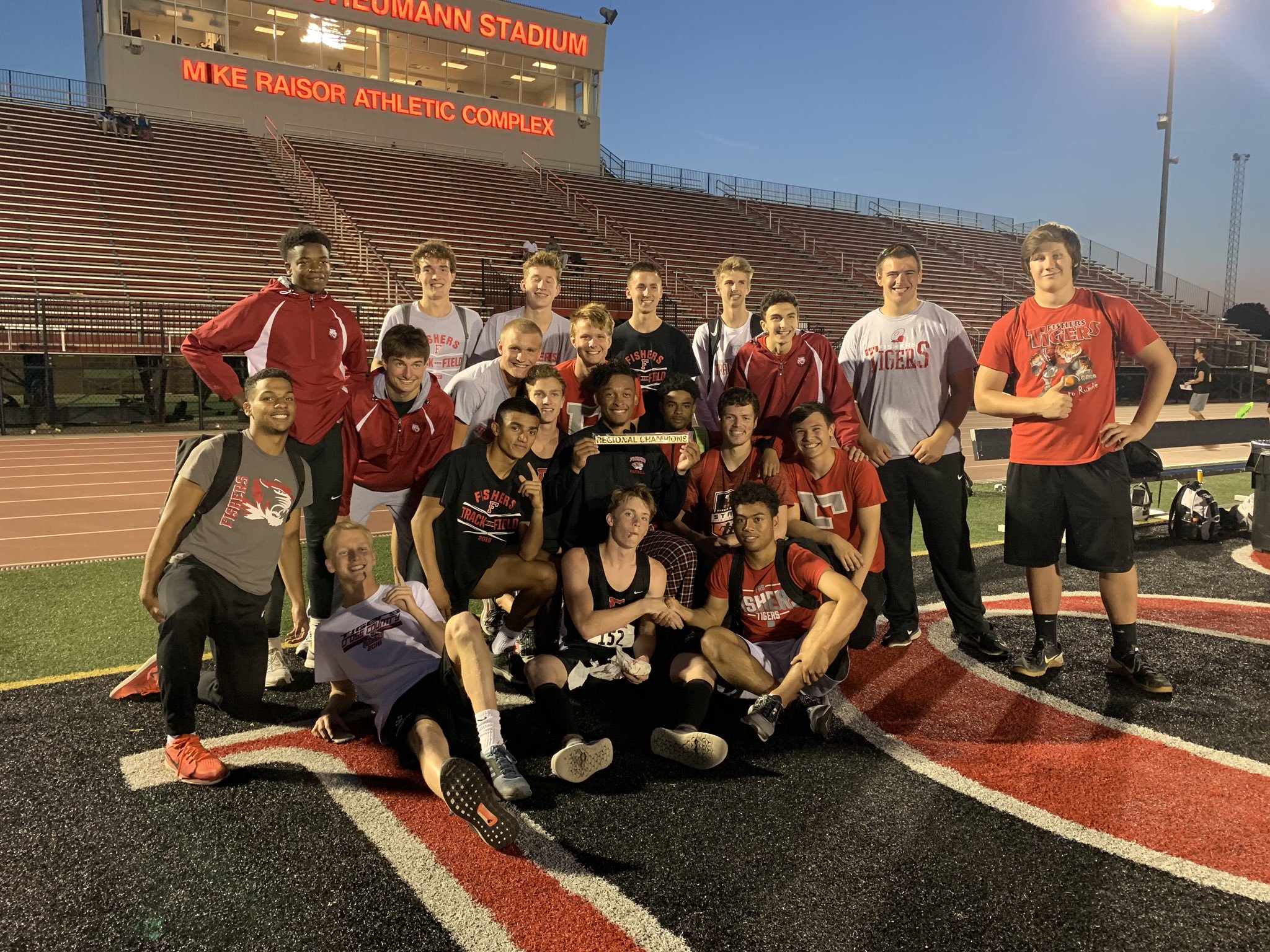 Whatever the answer is, now Fishers can be added to the list. The Tigers won their first-ever post-season track and field title Thursday by claiming the Lafayette Jefferson regional. Fishers emerged out of a crowded field, scoring 90 points.

Athletes of all ages had a part in Fishers’ historic win. Senior Ethan Meyer had a part in three of the Tigers’ five event wins, starting with the 4×800 relay. Meyer joined senior Hunter Christy, junior Drew Smith and sophomore Jayden Castillo in placing first in that event.

Meyer later won the 1600 run, finishing over five seconds ahead of second place. Then in the 4×400 relay, Meyer joined senior H.L. Lewis, Castillo and freshmen Keefer Soehngen to win that race, beating out West Lafayette by a quarter of a second.

“I just want to help our team score as much as we can, because we knew it was going to be a close meet,” said Meyer.

“It feels amazing,” said Tobias. “Putting in all that hard work. It feels great for it to finally pay off.”

All of the above athletes qualified for next Friday’s IHSAA state finals at Indiana University. The top three finishers in each event make it to state. Fishers got two callbacks, giving them 10 total state qualifiers; Castillo advanced in the 800 run and Lewis earned a spot in the 200 dash.

“State’s a whole different animal,” said Warnecke. “Hopefully we get a few more callbacks and we’ll just go down there to Bloomington and do the best we can.”

Also qualifying for state from Southeastern were sophomore Chris Stein in the 400 dash, sophomore Xan Cluff in the pole vault, and the 4×100 relay of team of freshman Stephen Sydnor, sophomore Gage Pratt, junior Caleb Durden and Malone. All of the above finished third in their respective events. The Royals got two callbacks: Senior Eric Carothers in the 1600 and Pratt in the 200.

Carmel finished fifth as a team with 65.5 points. Junior Logan Sandlin picked up a win for the Greyhounds in the pole vault and also finished second in the 300 hurdles, qualifying for state in both events.

“It feels great,” said Sandlin. “It takes a lot of work in the pole vault just because it’s such a technical event. So to see everything come together in a big meet, it means a lot.”

Carmel had two other state qualifiers. Senior Pat Campbell was the runner-up in the 3200 run, and the 4×800 relay team of senior Drew Thornton, freshman Charlie Schuman and seniors Robert Kinney and Thomas Gastineau placed second as well.

Noblesville and Westfield both finished with 26 points. The Millers had three state qualifiers, all of whom where third in their events. Junior Shomari Rogers-Walton was part of two of those events, as he qualified in the long jump and as part of the 4×400 relay with juniors Shawn Kinslow and DeVontez Cox and senior Mitchell Conard. Sophomore Andrew Anderson qualified in the 800 run.

“It was a really fun race,” said Anderson. “I did what I wanted to do today and I’m looking forward to state next week.

Guerin Catholic senior Quinn Gallagher finished fourth in the 3200, while senior Billy Freudenthal placed sixth in the 300 hurdles. Both received callbacks to state.