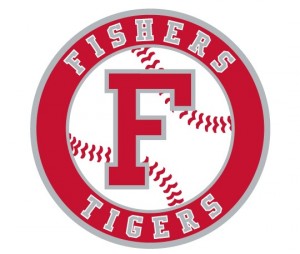 Fishers High School opened in the fall of 2006 and is located approximately 20 miles northeast of Indianapolis, Indiana.  It is a school of approximately 3,800 students in grades 9 through 12.  Fishers is a member of the Indiana High School Athletic Association (IHSAA) Class 4A (large enrollment) and the Hoosier Crossroads Conference (HCC).

The conference consists of 8 schools including:  Avon, Brownsburg, Fishers, Franklin Central, Noblesville, Southeastern, Westfield, and Zionsville.  (Three Lafayette schools (Harrison, Jefferson, and McCutcheon) were members of the HCC for the first 8 years that Fishers competed.)  These schools create a competitive conference, as all schools provide quality athletic facilities and place an emphasis on excellence both in the classroom and on the field.  Since 1999, six teams from the conference have won the Class 4A Baseball State Championship with four other teams finishing runner-up during that time.

The Fishers Tigers baseball program is one built upon character, class, and excellence in the classroom and on the field.  In its inaugural season (2007), the Tigers won 6 games, but lost ten games by one-run or in the last inning, including a 2-1 heartbreaking loss to rival Southeastern in the Sectional opener.  This first team was a young and inexperienced team playing without a senior class and with only two players who had previous varsity experience.  This same group responded in their second season (2008) with 13 victories including the school’s first victory over a ranked team (#2 Kokomo), the school’s first no-hitter (left handed pitcher Ben Taylor), and the school’s first Sectional victory (over rival Southeastern).  The 24 players from the first two teams built the foundation and established the expectation for what it means to be a “Tiger Baseball Player”:  one who is focused in the classroom, a model citizen off the field, and a fierce competitor who plays through adversity with class while displaying the utmost respect for the officials and their opponents.

The Tigers played their first official home game at Tiger Field on Wednesday March 26, 2008, after playing all of their home games in 2007 off campus at Trinity Ball Park in Noblesville.  Tiger Field (see below) is a completely enclosed field with an underground drainage system and a fully-automated in-ground sprinkler system.  The diamond’s dimensions are 314 feet down the lines, 354 feet in the alleys, and 374 feet to straightaway centerfield.  A full nine-inning scoreboard stands beyond the left field fence and lights surround the entire field enabling the Tigers to play night games.  There are brick dugouts and double bullpens enclosed down each foul line.  Each double bullpen allows for two pitchers and two catchers to work at one time.  A 14 foot by 75 foot hitting tunnel stands just outside the fence down the right field line and beyond the first base dugout complete with multiple hitting stations and portable protective screens for drill work.

There is permanent seating for approximately 350 people in an elevated grandstand behind home plate.  At the top of the grandstand is a modern press box, which houses the public address system used to announce the games and to play music for the fans, as well as the electronics to operate the scoreboard.  There is more than enough room along the side fences to accommodate additional spectators. 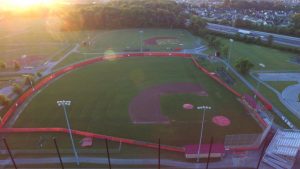 Adjacent to Tiger Field beyond the right field fence is a second field (JV Field) used for practice and occasionally JV games.  The dimensions to JV Field are identical to Tiger Field.  JV Field has irrigation in the infield only, a small scoreboard beyond the left field fence and double bullpens down both foul lines.  A second 14 foot by 75 foot hitting tunnel stands just outside the fence down the left field line and beyond the third base dugout.

Welcome to Tiger Baseball!  As the weather warms up in the spring, we encourage you to come out and watch us play.  We promise with our competition and the style we play that you will not be disappointed.  Fight Fishers Fight!  GO TIGERS!