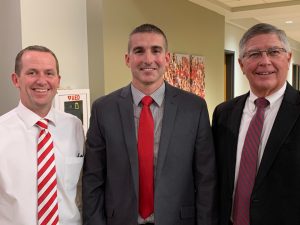 FISHERS, Ind. (February 12, 2020) — Fishers High School would like to announce the hiring of Curt Funk as the new Head Varsity Football Coach. Funk will replace Rick Wimmer, who announced his retirement from the position in early December. The appointment was approved at the February 12, 2020 school board meeting.

Funk has spent the past 10 seasons as the Head Coach for Mississinewa High School in Gas City, Indiana. During that time, Funk led the Indians to a 77-36 record and won the 4A Sectional Championship in 2017 and 2019. Funk served as the Defensive Coordinator for the 2017 North All-Star team. In addition, Funk has been the Head Wrestling Coach for Mississinewa for the past four seasons.

Funk is a 2003 graduate of Purdue University with a BS in Industrial Technology Education and holds a K-12 certification in physical education. Funk will teach in the physical education department at Fishers High School.

“With a winning record over the past nine seasons, Coach Funk has proven himself as a successful football coach,” says FHS Athletic Director Rob Seymour. “However, what really excites us about Coach Funk is his dynamic personality and his passion for the success of his student athletes.”

When asked about his move to Fishers, Funk shared, “my family and I are thankful for the opportunity to join the Fishers family. We look forward to continuing the tradition of a successful football program and developing student athletes. Every day we will strive to close the gap and become our best.”

Funk and his wife, Janette, have two sons. Kyler is a senior and Camden is a 6th grader.